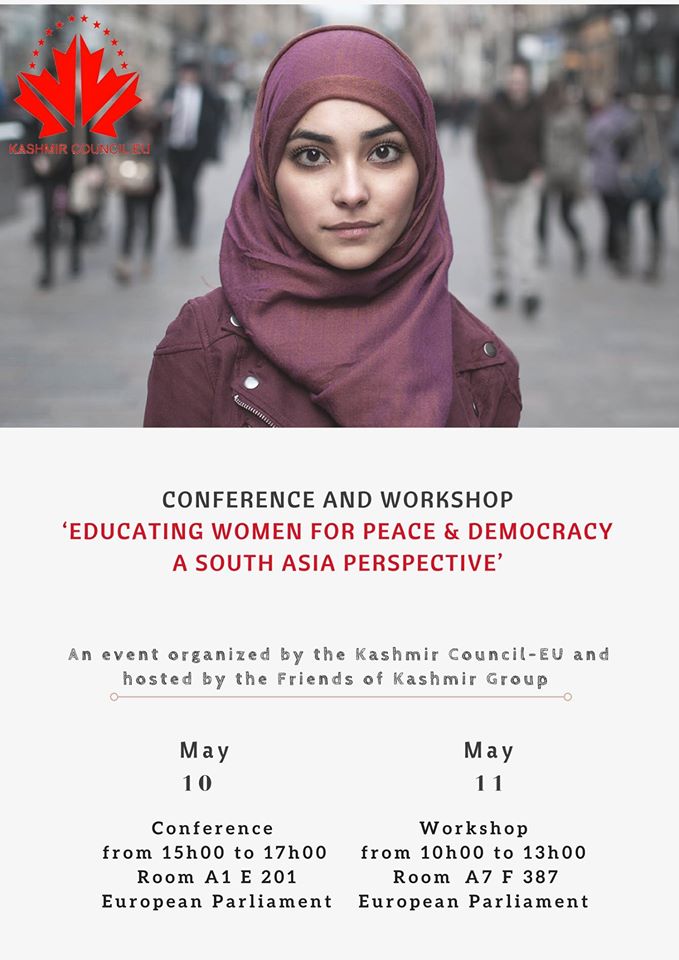 The Kashmir-Council EU, in coordination with the Friends of Kashmir from the European Parliament, held the 2017 Women’s Conference themed ‘Educating Women for Peace – a South Asia Perspective’ on the 10th and 11th of May.

This year’s Conference, the discussion revolved around the potential of different kinds of education to mobilise women to engage in the struggle for gender equality and in preparing women and girls to participate fully in the development and maintenance of democratic institutions of governance. The programme has been carefully constructed in order to ensure that there is the possibility for a free exchange of ideas and debate. Women’s education is an important step in the path towards the achievement of self-determination for Kashmir, and this conference aims to be a significant part of that process.

MEP Sajjad Karim said it was great to welcome the high academics from different parts of Europe. He said this conference is very timely because the Kashmiri women are increasingly under pressure and they are facing true and emotional wounds. Talking about the education of women in South Asia, the host of the event MEP Afzal Khan said, that poverty was the leading reason for the illiteracy among women. Many of the girls do not go to school which means that a large number of girls are deprived of education. He said, not educating women loses the potential of the nation.

Senior academics from Warsaw, Prof. Agnieszka Kuszewska from the University of Social Sciences and Humanities, and Dr Agnieszka Nitza from Collegium Civitas University, also spoke at our event. Professor Dr Agnieszka Kuszewska highlighted the major challenges of women’s education in Pakistan and the general role of education in Pakistan’s economic, political and social development. She said that education and literacy are necessary for women to empower them with new tools in the public participation and therefore, improving their situation. Women’s education in Pakistan is a fundamental right of every female citizen, according to the Constitution of Pakistan. A voice in public debates and participation in a democratic practice is an inalienable part of human development and a key element to the state’s democratic progress. While Dr Agnieszka Nitza of Collegium Civitas Universty Warsaw spoke on the topic “Women Make Democracy Happen: India and Pakistan Comparison”. She said, that while strong women political figures abound in Indian and Pakistani states’ history, some women politicians have also introduced controversial policies. For instance, Indira Gandhi proclaimed a state of emergency and indicated a coercive sterilisation program. Talking about Quota systems for women in Pakistani parliament, she said, it was to ensure the presence of female representatives in Pakistani politics, while Indian reservation policy lacks such measures on a state level.

The Chairman of Kashmir Council-EU Mr Ali Raza Syed talked about the central role of education for peace and democracy in South Asia, in particular, the education of women in India, Pakistan, and Kashmir. Although entire communities suffer the consequences of armed conflict, women are particularly affected as they face humiliations, torture, rape and deprivations and, moreover, they have to see their sons, brothers, husbands or fathers suffering from the state’s repressions. Mr. Ali Raza argued that healthy, educated and dignified women can ensure a peaceful, educated, democratic South Asia, whose great potential is repressed by India’s refusal to allow Kashmiris democratic right to self-determination. The role of women is very important for peacebuilding and democracy and they can make the society better through their specific role. Women in Indian Held Kashmir are severely touched by the armed conflict. He further added that the conference has the aim to would contribute to the richness of the debate and therefore, strength the demand of the Kashmiri women.

The former EU Ambassador Mr. Anthony Crasner stated that the European Parliament’s report on India-EU relations does not even mention Kashmir.

Khaoula Saddiqi, further added that schools in Indian-administrated Kashmir are being closed down for extended periods because of the conflict, a measure that affects the economy and leads to poverty. Education of women is essential in a peaceful society.