The One Million Signatures Campaign is directed towards reflecting the consensus opinion of all the humanists of the European Union and their collective demand to end the illegal occupation of Kashmir. The campaign is derived from the provision of the Lisbon Treaty of 2009 of European Parliament. The treaty allows the citizens of Europe to bring any human rights issue to the agenda of the parliament by presenting one million signatures in favour of the demand.

It is the widely reported and known fact that the people of Indian-Administered Kashmir are suffering grave injustice and torture on a daily basis for pressing their demand for freedom as a basic human right. It is also widely known that all the reputed human rights organizations, social movements and cultural forums have always favoured the human rights of Kashmiris while exposing the atrocities and human rights violations committed by 700,000 army deployment by the Indian government.

The salient objectives of the campaign are as follows:

The Kashmir Council-EU has taken its signature campaign to the capitals of EU countries Romania Hungary, Slovakia, Germany, Norway, Ireland, Austria, Belgium, Spain, France, Sweden and Poland. As a result, more names have been added to the petition of EU citizens in solidarity with the people of Kashmir and their right for a plebiscite under United Nations supervision on self- determination, embodied in UN Resolution 1948. The target is to collect one million signatures EU- wide. 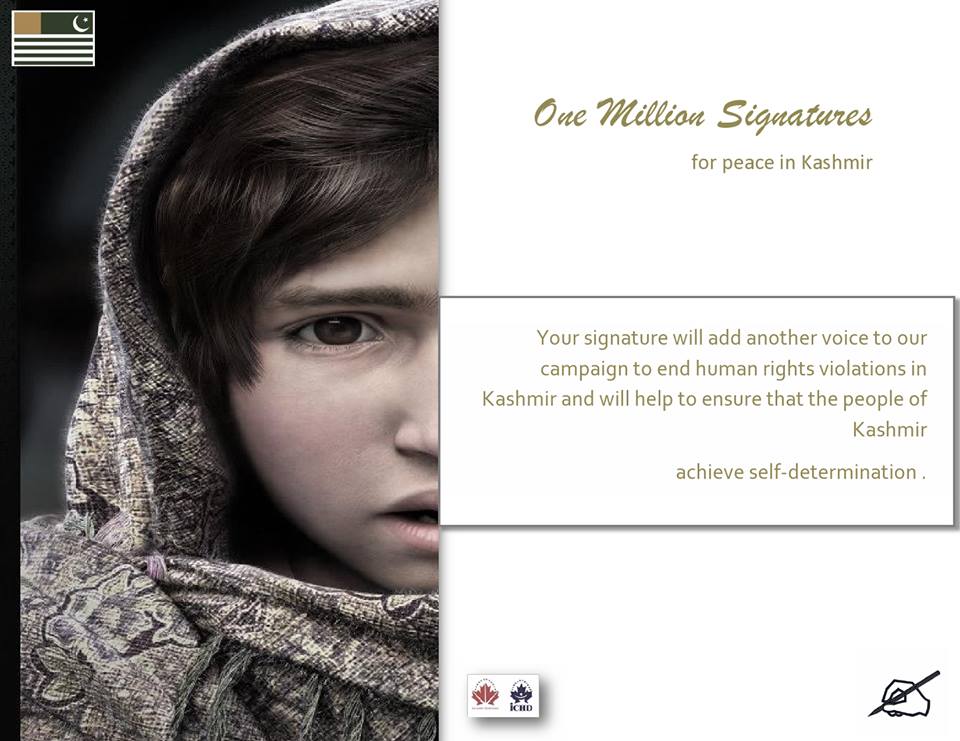 If you wish to add another voice to our campaign and give your support you can do so by signing our online petition on our website via the following link: One Million Signatures Campaign. 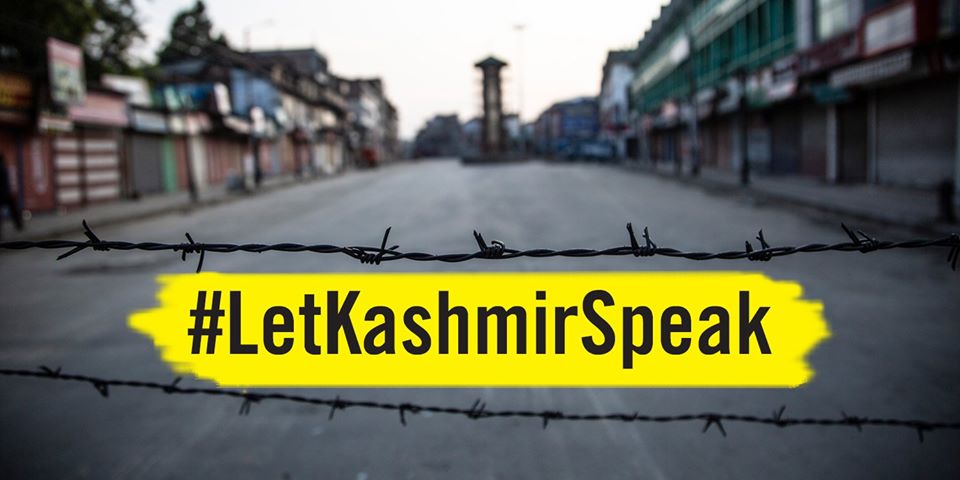 In a climate of rising tensions in different regions around the world, the situation in #Kashmir must not be neglected. India has made its views known, as has Pakistan, but #Kashmiris themselves cannot find a voice on the global forum #LetKashmirSpeak.

What is happening in Kashmir ?

Nearly 8 million people in Kashmir have been living under a strict curfew since August 5, 2019. The curfew and the restrictions imposed must be lifted immediately & the fundamental rights and freedoms of the people of Kashmir must be restored and respected in line with the international law obligations. On 5 August 2019, the Indian government revoked the special status of Jammu and Kashmir through a series of amendments in the Parliament. All these decisions were taken without consulting the political leaders or the people of Jammu and Kashmir. Many political leaders across the political spectrum were also put in administrative detention and continue to be in custody without charge or trial. The region is now the most militarized zone in the world.

The communications blackout created an information black hole in Kashmir. The government of India is restricting freedoms by shutting down their ability to communicate with each other and the rest of the world, and by imposing curfews or curfew-like situations preventing people from leaving their homes. Reports highlighted a number of worrying human rights violations. We have seen torture, medical emergencies, mass arrests and detentions and children and young people being picked up in the middle of the night. Protesters speaking out against the latest wave of government oppression were met by security forces firing tear gas, rubber bullets and pellet guns in an attempt to suffocate all opposition. Life has been derailed for the people of Jammu & Kashmir. Families have been torn apart as they live under siege in Kashmir. This is the human cost of the government crackdown and it cannot be ignored. The decades of the political battle over Kashmir have affected its people more than anybody else, and now more so than ever before.

The Kashmir Council-EU raised these concerns with the Members of the European Parliament and other EU high-level officials either through bilateral meetings or delivering them letters urging them to take action. The Council has also organised demonstrations and signature campaigns demanding an end to the communication blockage. The situation in Kashmir was eventually debated in a plenary session last September. The EU encouraged both sides to engage in and maintain a positive dialogue and to include as far as possible the Kashmiri people. The Council will continue to work and use all of our resources to help the people of Kashmir. 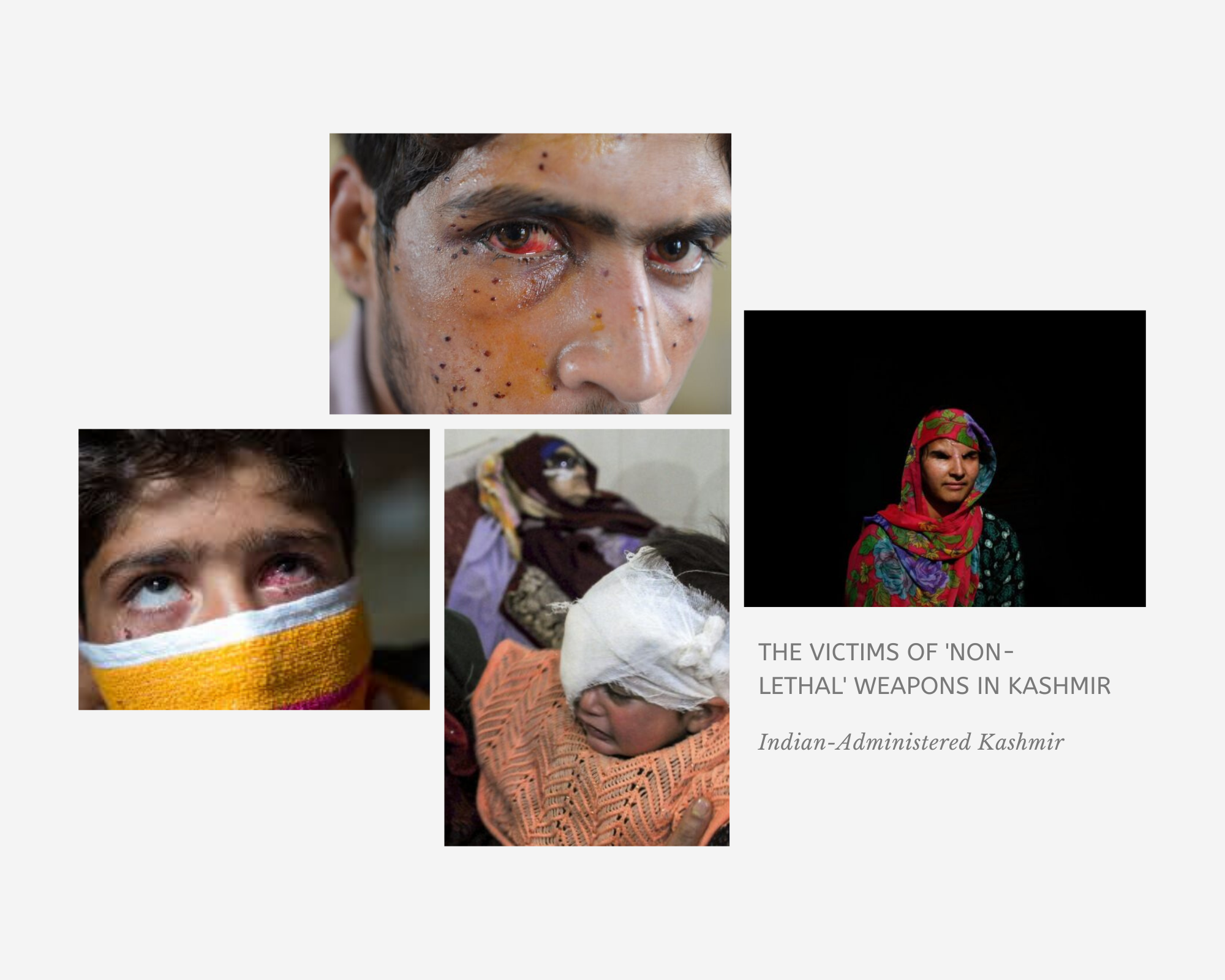 Following the events of July 8, 2016, demonstrations and other kinds of civil unrest have occurred throughout Jammu and Kashmir. Since then hundreds of Kashmiri protesters have been blinded by Indian shotgun pellets used as a ‘non-lethal’ crowd control measure, against unarmed demonstrators. Although pellet guns are considered to be non-lethal due to the small size of the pellets, these weapons are capable of inflicting life-threatening injuries on anyone within a range of 500 yards. This was an unprecedented expression of state violence. There is no other recorded instance of a modern democracy systematically and willfully shooting at people to blind them. At the end of August, according to data obtained by one of India’s national newspapers, nearly 6,000 civilians had been injured, and at least 972 of them had suffered injuries to their eyes. Some of the victims whose sight could be saved are unable to get the treatment they need because of the lack of specialist doctors and equipment in the hospitals of Jammu and Kashmir. Many of the patients with damaged sight are children and young people. They will live for the rest of their lives wholly or partially in darkness.

The Kashmir Council-EU was able to launch various initiatives calling for an end to the use of pellet guns on unarmed civilians, at the heart of Europe. With the help and assistance of the Jammu Kashmir Coalition of Civil Society (JKCCS), we had access to the latest developments and figures from Indian-Administered Kashmir which were particularly useful in our campaign of raising awareness of the issues. After months of advocacy, meetings with EU officials and the heads of the Pakistan and India delegations, and letters sent to Federica Mogherini, the High Representative of the Union for Foreign Affairs and Security Policy, an exchange of views took place in the European Parliament in February 2019.

No peaceful resolution to the Kashmir conflict is conceivable while these abuses continue. We are told that India must be recognised as an international power. But before this can happen, the Indian government must first demonstrate that they can respect international law. The international community, including the EU, has a duty to argue for the resolution of this long-standing conflict. Ultimately, there is only one solution and it is a peaceful one: to let the Kashmiri people themselves choose their destiny, as the UN Security Council first laid down in 1948.